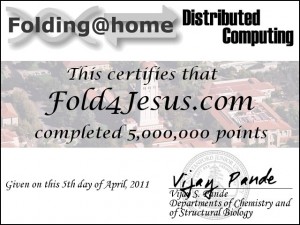 From our humble beginnings 2 months ago we’ve grown to reach five million points today! The team is also currently ranked in the top 1,000 teams in the world. Fold on!

As team Fold 4 Jesus nears the 5 million point milestone (any day now) we look forward to new folders joining the team and folding for His glory. Make sure you check out our guides on setting up you computer or PS3 to fold and join our team today!!

Friday morning the UPS man stopped by and left a stack of Newegg boxes at the door, I grabbed them and made a bee-line for the test bench. 20 minutes later phase 1 of the new folding farm rig was ready to rock. I installed Windows 7 Pro and the graphics drivers, prepared my console clients and off it went, cranking out ever increasing points for team 200386. Each motherboard will have 6 GTX460s on it in the future, with a custom enclosure to support the 6 cards. Fold on! 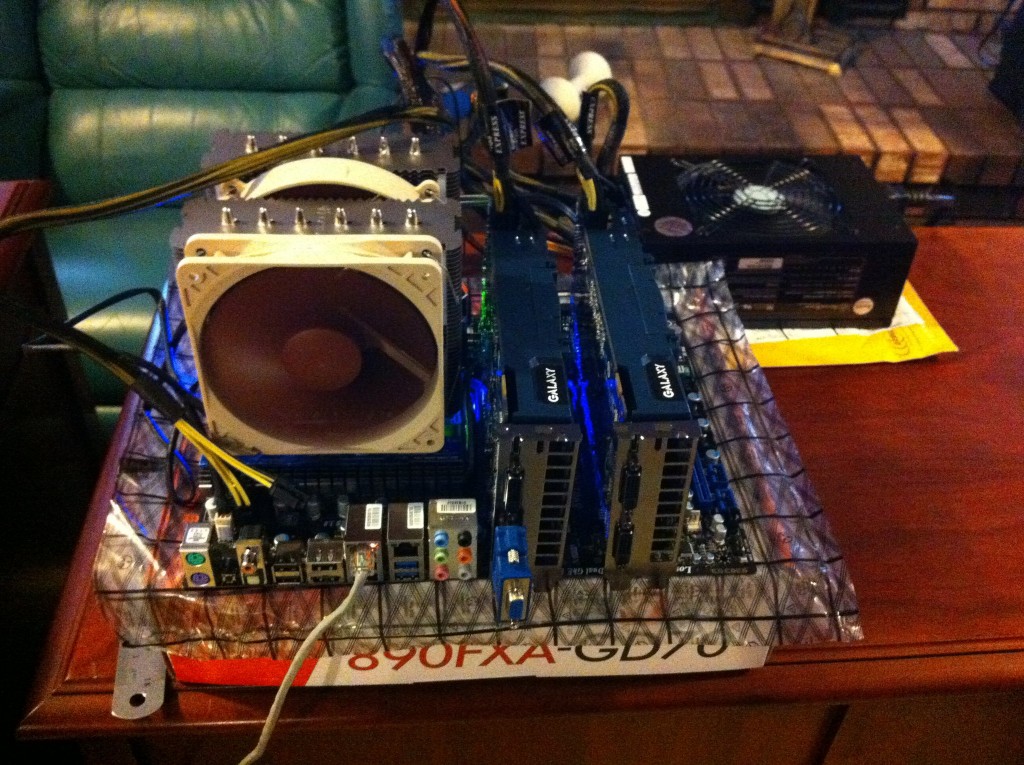 Starting 3 weeks ago with no points we’ve reached our first million points today! The team is also currently ranked in the top 3,100 teams in the world. Fold on!

Climbing as fast as we can, and folding harder than ever, team Fold 4 Jesus is currently ranked in the top 4,500 teams in the world. This news comes only two weeks after starting at the bottom of the team ranks! New hardware will be coming online in the elitez28 folding farm to sustain our climb to the top. Jump in with whatever hardware you have and put help put God’s name in the top 100!! 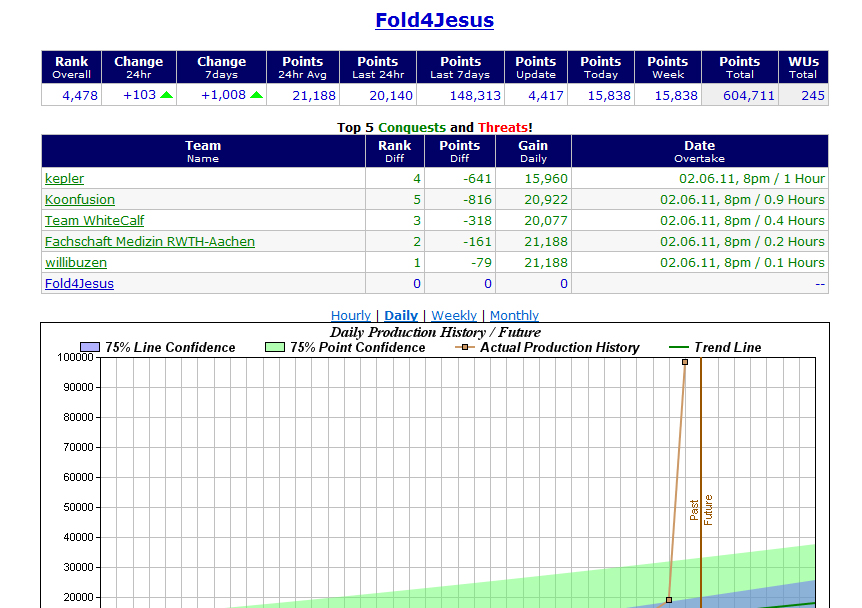 Just four short days ago we were ranked at the bottom of the team list (194,127), now we hold position (12,840). Our climb through the ranks should leave no doubt in anyone’s mind that team Fold4Jesus is here to stay. As the team moves up more tracking options will be available from 3rd party stat sites like folding.extremeoverclocking.com. Track our current position on the Stanford website, Team Fold4Jesus.

How To – Setup Your PC To Fold

How To – Setup Your PS3 To Fold

How do I get a copy of Folding@home for the PS3?

How do I setup my PS3 to fold for this team?

Step 1: From your PS3’s main menu, navigate to “Network”  and open “Life With Playstation.”

Step 2: Hold down the “Square” button until the channel menu pops up. Scroll to the bottom channel, which should be Folding@Home and press the “X’ button.

Step 3: Press the “Triangle” button, and scroll to Identity using the D-pad, then open it.

Step 5: Give yourself a hand, you’re done! Leave “Life with Playstation” running as much as you can!

How long will it take to complete the work unit (WU)?

We have set PS3 WU’s to take approximately 8 hours to complete. The logic behind this was to ensure the PS3 could be run only over night and still yield a useful result. We will likely decrease this time in the future to try to make it easier for PS3 donors to only briefly run their machines, but still make useful contributions.

How long do I have to complete it?

Note that Work Units (WUs) “expire” after a certain amount of time. This means that after a certain amount of time, if the WU has not been returned, we assume it’s not coming back and our server moves on from there. This is necessary due to the fact that future work units depend on previous work units and so we need to eventually give the work to someone else to get it completed. The times to complete a WU for the PS3 is short (8 hours), so the deadline time is also correspondingly short (2 days).

What type of calculations the PS3 client is capable of running?

The PS3 right now runs what are called implicit solvation calculations, including some simple ones (sigmodal dependent dielectric) and some more sophisticated ones (AGBNP, a type of Generalized Born method from Prof. Ron Levy’s group at Rutgers). In this respect, the PS3 client is much like our GPU client. However, the PS3 client is more flexible, in that it can also run explicit solvent calculations as well, although not at the same speed increase relative to PC’s. We are working to increase the speed of explicit solvent on the PS3 and would then run these calculations on the PS3 as well. In a nutshell, the PS3 takes the middle ground between GPU’s (extreme speed, but at limited types of WU’s) and CPU’s (less speed, but more flexibility in types of WU’s).

What is the power consumption of the PS3 running the FAH client?

Yes. We have several PS3’s running in our lab, running Folding@home 24/7 and have had good results so far. Sony developed the client to run on the PS3, and supports it completely.

It can take 1-2 hours after the WU has been received for the points to be entered into our database. We usually run hourly updates, but during periods of heavy activity, it can become less frequent.

How are the number of active machines calculated?

Instead, we calculate the number of “active” clients, i.e. machines that have returned work recently. Active PS3’s are defined as those which have returned WUs within the last 2 days. This is a much shorter timeout than what we set for normal CPU clients, as the PS3 client’s WU deadline is much shorter (typically 2 days). However, as we communicate with the distributed clients fairly infrequently (no more frequently than every 8 hours), it is hard to precisely know how many machines are running and these numbers are best used as an order of magnitude estimate of the power of our network.

How are the FLOPS calculated?

People often use the number of floating point operations per second (FLOPS) as a metric for the speed of a computer. One question that arises is how to compare machines with radically different architectures. In particular, what requires only a few operations (or even just a single operation) on one machine could require many operations on another. Classic examples are evaluations of functions like the exp(x) or sin(x). On GPU and Cell hardware, functions like this can often be calculated very quickly, say in one cycle, while this is often counted as 10-20 operations for other machines.

We take a conservative approach to FLOP calculation, rendering quantities such as exp(x) or sqrt(x) as a single FLOP, if the hardware supports it. This can significantly underestimate the FLOP count (as others would count an exp(x) as 10 or 20 FLOPS, for example). Others take a much less conservative approach and we are considering giving two counts, adding a more traditional (less conservative) count as well.

The ideal comparison would be to run Folding@home on the supercomputer itself to test its speed. In this sort of comparison, FAH would likely do very well, and we are investigating the best way to perform this benchmark, as we expect people would be very interested.

How should the FLOPS per client be interpreted?

We stress that one should not divide “current TFLOPS” by “active clients” to estimate the performance of that hardware running without interruption. Note that if donors suspend the FAH client (e.g. to play a game, watch a movie, etc) they enlarge the time between getting the WU and delivering the result. This in turn reduces the FLOPS value, as more time was needed to deliver the result.

It seems that the PS3 is more than 10X as powerful as an average PC. Why doesn’t it get 10X the credit as well?

We balance the points based on both speed and the flexibility of the client. The GPU client is still the fastest, but it is the least flexible and can only run a very, very limited set of WUs. Thus, its points are not linearly proportional to the speed increase. The PS3 takes the middle ground between GPUs (extreme speed, but at limited types of WU’s) and CPU’s (less speed, but more flexibility in types of WUs). We have picked the PS3 as the natural benchmark machine for PS3 calculations and set its points per day to 900 to reflect this middle ground between speed (faster than CPU, but slower than GPU) and flexibility (more flexible than GPU, less than CPU).

The PS3 is outrunning all the rest of the FAH client types. Should I stop my existing PC/GPU/… FAH clients?

NO. The other clients are valuable to us too and we have chosen a points system to try to reflect the relative merits of each different platform to our scientific research. For example, the SMP client has been producing some very exciting scientific results and continues to be very important in our work. By supporting machines with lots of different functionality, we have a very rich set of hardware on which to run varied types of calculations, allowing us to tailor calculations to the hardware to achieve maximum performance.

How does the PS3 client’s visualization compare to other FAH clients?

The PS3 client supports advanced visualization features. While the Cell microprocessor does most of the calculation processing of the simulation, the graphic chip of the PLAYSTATION 3 system (the RSX) displays the actual folding process in real-time using new technologies such as HDR and ISO surface rendering. It is possible to navigate the 3D space of the molecule using the interactive controller of the PS3, allowing us to look at the protein from different angles in real-time.